There are many famous destinations all along the French Riviera that attract countless visitors every year such as Nice, Cannes, Saint Tropez, Menton and Antibes. They all have an abundance of culture and beauty to offer, such as the Promenade des Anglais, La Fête du Citron, La Ponche and the Cannes Film Festival. But there are plenty of hidden gems scattered along the coast that deserve a visit during a yacht charter, providing a unique and quaint experience away from the crowds.

Bormes-les-Mimosas is one of the most beautiful villages in all of France and is best known for its bougainvillea flowers. The commune won a gold medal in 2003 from the Entente Florale Europe (an international horticultural competition) for being a “city in bloom”. It features quaint, narrow lanes, a great choice of cafés and an old chapel with stained glass windows and a surrounding garden. But the most interesting attraction is the Fort de Brégançon, a medieval fortress thirty-five metres above sea level that provides shelter from the easterly wind and a watch point for the harbours of Hyères and Toulon. It is said that Napoleon Bonaparte discovered it after being appointed Inspector of the Coast and equipped it with twenty-three cannons. 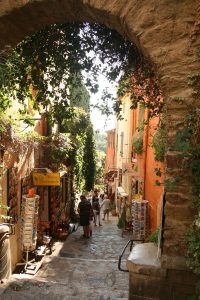 The Domaine du Rayol is another location undiscovered by the crowds. The botanical garden in Rayol-Canadel-sur-Mer was first developed in 1910 by Theodore Courmes and consisted of mainly agaves, eucalyptus and palms. Now it has plots of land dedicated to plants from different parts of the world, such as Australia, California, the Canary Islands and South Africa, making for a lush and varied mixture of vegetation. It also has a rustic restaurants nestled in the gardens where you can stop off for lunch and gaze at the panoramic sea view. At the top, you can find an old hotel and gift shop, brimming with books, paintings and fragrant soaps. 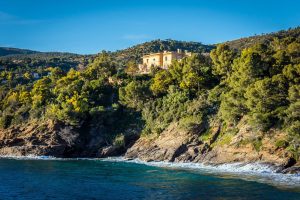 The little town of Fréjus has so much to offer. Once an important province of Roman Gaul, Fréjus is a quiet spot that has some surprisingly big attractions – including some Roman ruins, a chapel decorated by the filmmaker-artist Jean Cocteau, and an impressive Gothic cathedral whose cloister houses a unique collection of medieval ceiling frescoes. It has a picturesque old town with different coloured houses in the style of the Ligurian towns and plenty of historical sites. It’s particularly worth a visit on Wednesday and Saturday morning, when the old-town market is in full swing.

The south of France is famed for its perfume production, and nowhere else is it more prevalent than Grasse, the perfume capital of the world. 16th century trading gave the town jasmine, and Grasse’s more inland location, protecting the plants from the salty air meant that it was perfect for growing them. Soon, the local farmers were cultivating flower meadows that offered unique scents like lavender, rose, myrtle, orange blossom and wild mimosa. You can learn more about this in the International Perfume Museum, and the village itself has a wealth of delicatessens, boulangeries, wine shops, and a Michelin starred restaurant, La Bastide St-Antoine.

Often overlooked on a yacht charter, Bandol combines the glamourous side of the Côte d’Azur  with a world-famous wine appellation. Bandol red wines are a force to be reckoned with and are exported to some of the finest tables around the world. The Bandol appellation includes a wide swath of land covering as far north as the hilltop villages of Le Castellet and La Cadiere d’Azur, so it’s best to check locations before choosing a vineyard to visit. Besides indulging in some of the south’s finest gourmet offerings, Bandol is an ideal location for people who love the beach and spending time along the Mediterranean Sea. 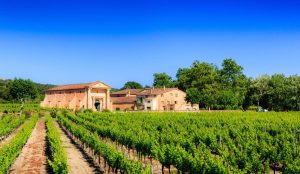